Brian Talma held his first Beach Culture World Tour Pro Maui event in  March 2015, during the annual action & water sports industry photo shoots, he brought together the top pro sailors, the photographers and the competitors, to promote the sport, themselves and the life style.

“This is the BCWT Pro, and the main objective is to make a big impression with the media, but don’t be mistaken these are highly competitive superhero’s and they are taking this seriously.

The Aloha Stone was already biting at the bit, he was ready for deAction!! However he had one major problem, his harness was missing. He was pacing around the car park looking for it, which was breaking his competition game. It seemed as if there was a competitor that wasn’t taking this competition too lightly, Norman Roediger, he knew the rules: “Who has the most fun on and off of the water wins!!”  after about 10 minutes, our search was finally over, No man fessed-up & returned the Aloha Man’s harness, with a hearty laugh, The Aloha Stone gave his legendary Aloha smile, masking his game face for a second, but now it was back to business.

deAction Man, waved his hand, signaling for the games to begin, the photographers Jimmie Hepp and Sofie were taking pictures from land  and Paul in his yellow helmet was taking pictures from the water. Nor Man, is up to his old tricks and shocks the competitors and photographers, with one of the biggest moves of the competition, he is off the mark with a flying aerial dressed in pink bunny outfit. It was a full on distraction, and injected the humor that signifies the BCWT.

….The BCWT Maui pro was on, Paul was howling and shouting as the riders lined up with him for the money shot; Jimmie and Sofie were perched on the rocks getting their shots. These are the key, social media photographers, they tell the daily story of what happens at Hoopika and around Maui. The objective of this fight is to create a different competitive method to win the BCWT title, it’s entertaining and fun, these photographers are lifestyle sellers, and the honorary judges of the BCWT. 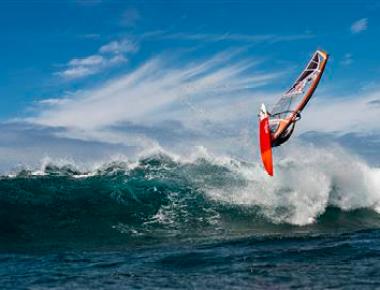 It was a busy day out at Hookipa, the photographers were given the names of the 10 competing riders and the entertainers were matching move for move, Aloha Stone had an explosive 1 hour session with some massive push loops, a few goiters and a lot of aerials before retiring to the beach to drink a few beers and picnic with his family (after all, lets be honest, he knows he is wining already, living the perfect life in Maui); the Big K was pushing his limits with some sky high one footed back loops, takas and tweaked aerials, the man was on fire, he truly thrives in competition; deAction Man, was  in his element, electrifying  the water with some flying aerial and high forward loops, his smile was infectious, this was his event, his concept and he was a happy man. Nor Man, was the big surprise, putting the wild in card, he had officially entered the elite pro division of the BCWT and he understood the format; first he took the Aloha Stone’s harness and now he is flying around the place in a pink bunny outfit……full on entertainment! And the young gun Harley Strong had graduated to the pro division, and now had the big boys running for cover in the tall grass; pulling some massive aerial and forward loops. 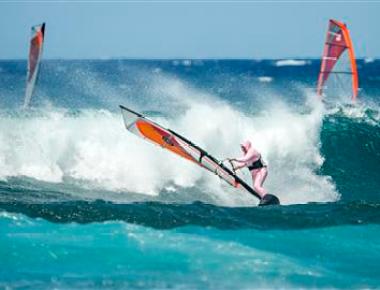 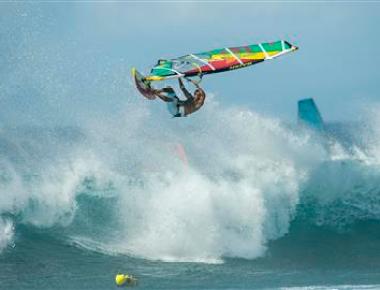 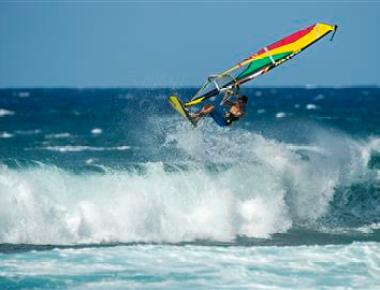 Ricardo  Campello (three time freestyle World Champion, and hold the present ranking of 3rd in the world) was also given a wild card, but was late for the heat, so he made a desperate attempt to make an imprint on the BCWT, he pushed into a huge back loop but fell into the water and when He lined up, for a massive move on a logo high wave in front of deAction Man, he crashed & burned. The Big K, threatened by Ricardo’s late entry, signals for the end of the heat, but Paul was still in the lineup, so the Competition continued!!”…… However it didn’t matter, as it just wasn’t Ricardo’s day; If anything however, he definitely won the quotation of the competition, “Can we start over?!!” This was his initiation into BCWT, securing him the name, “Flying Star for bringing his acrobatic freestyle skills to the wave riding and jumping windsurfing world, his championship title was on the line, respect!!……………”Flying Star!!”

There was another super hero, Antoine,( PWA young up & coming challenger, ranked 9th in the world) however he didn’t register, so the photographers weren’t looking out for him, but before long he certainly grabbed their attention, first connecting with Paul in the water as he was cranking deAction, blasting high into the sky. After the heat the competitors and photographers, agreed that he was the man, but there was a problem, he wasn’t on the list of competitors, then again, this was the BCWT, anything goes.  Because of his dominance he was given the beach culture name, “Super Max!!”

It was a full on action day at the office, Hookipa Beach park. What a success for the BCWT Maui Pro, pulling off the event. Working with the leading photographers and some of best windsurfing pros and personalities, while having fun competing at the BCWT pro in Maui.  The judges/photographers ranked the riders and the results were tallied up. This would be the BCWT Maui Pro – Media winner!

The BCWT award party was held at the Famous Flatbread restaurant on Tuesday March 1st, This was where the title of the fight would be declared!   As this was deAction’s Man’s concept, he dropped US$500.00 plus 25% of all his painting sold into the pot and challenged the rest of the riders to put their titles, reputation and cash on the line also. Aloha Stone stepped up to the plate, and matched deActionMan with US$500.00, he also hosted the closing party at Flatbread. He knew the rules, but it was important to try to sway the judges, little did he know the results were already in.  This was a highly spontaneous event, and the photographers were not aware of his offer at the time of voting. Later they admitted that he probably would have had the winning vote, had they have been privy to this information earlier, as they all love Flatbread and could easily be swayed by some shots and delicious pizza. But then again, did the Aloha Stone, really need to drop so much into the pot? Nor Man, aka Rabbit, was pulling all the stops out, preaching to the judges how he believed the BCWT Pro should have been judged……. obviously in his favor”.  The Big K, however was solely relying his performance and the judges results.

We were all grateful to the Aloha Man, for living up to his reputation, our tummies were full and our hearts were happy complements of Josh’s amazing spread of pizza and shots at Flatbread!

The Flying Star arrived late, with the same nonchalant carefree style that he displayed during competition, he did however contribute to the festivities with stories; and after finally  understanding the rules, he pulled out his phone & snapped an epic selfie with the Aloha Man  and deAction Man, which later generated hundreds of media likes… making him the social media winner.

“Super Max”, defiantly made the strongest presence of the heat and was awarded the Media & competitors Award and entrance into the BCWT World Championship in Barbados in May 25th to June 3rd.

There was also voting by riders, spectators, media and special guests, for their favorite competitor, and once again, just before the final vote, the Aloha Stone made a last ditch effort and came out with a tray of tequila shots. Doubtful that this voting method could be trusted, the deActionMan, handed out pencils and voting cards, hopeful that the final result wouldn’t be rigged………..The Big K, wins!!

The BCWT Pro Maui (the major award), Title fight prize purse, was more like a poker’s money pot, the riders were dropping money to increase the value, as the winner takes all….even spectators like Funk (Rob Funk, spectator & well know Maui Local), who was effected by the drinks, empties his pocket into the pot, not realizing that the winnings were only for competitors. The atmosphere was electric and the overall winner of the Beach Culture World Tour Maui Pro, is de big K

In true Aloha spirit de Big K spontaneously gave each of the photographers $100.00 out of his winnings!

The event was a huge success, and the next event is the BCWT World Championship in Barbados May 25th to June 3rd. The Big K, Kevin Pritchard will be there to defend his title; up and coming super star, Antoine Martin will be a major challenger looking to take down de Big K. but deAction Man, with his local knowledge intends to take back his crown. Don’t forget Wylde Style, Fiona who has been competing on BCWT with big boys and beating them.